The Four Crosses Ghost Hunt Special Only With Haunting Nights

There are numerous reports of glasses smashing, unexplained footsteps, and the apparition of young girl are the most common of all.   The sounds of children crying and shadowy figures are often seen both day and night.

A strange occurrence happened when the manager at the current time was opening up first thing in the morning. She was checking all the areas of the pub when she entered the Ladies toilet to find two flowers crossed over each on top of one of the toilet seats. Assuming it was someone from the night before she left to carry on opening up. However, when she passed the toilets again shortly after, she was perplexed to find a heavy candlestick had moved from the fireplace and was now blocking the door to the toilet! Needless to say, she was on her own at the time, as she always was opening up in the mornings.

Other reports include the apparition of a Roundhead soldier, a man in a long dark cloak standing in the car park on rainy evenings, looking longingly back at the building. A member of staff came face to face with an apparition of a teenage girl with unkempt hair and tatty clothes, in the corridor by the kitchen. They looked at each other for a few seconds, and the apparition turned away and walked through a wall! The member of staff was so shook up after this she quit her job soon after.

Haunting Nights looks forward to welcoming you to this very active location. 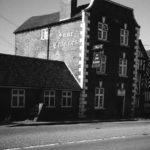 During the ghost hunt you will have the chance to use various methods of ghost hunting to include Victorian seances, Ouija boards, table tipping and glass moving as well as the more up to date methods.