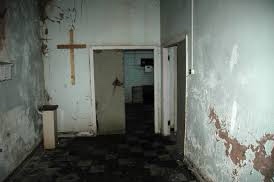 Newsham Park Hospital was once Liverpool Seamen’s Orphan Institution, and home to children whose fathers had perished at sea.

It later served as a hospital for the mentally and terminally ill, which is when its tragic past began to catch up with it.

A nurse, who reported seeing ghostly apparitions, was found dead at the top of the stairs.

Patients began to mutter feverishly about ‘the children’.

After numbers began dwindling in the orphanage, it closed and became a hospital and mental asylum in 1951 until it was closed in 1997

Today, the derelict building is decayed in time, with abandoned wheelchairs and hospital trolleys littering the corridors.

Ghost hunters have reported seeing shadowy figures in the decaying wards, and hearing a strange , dragging sound in the mortuary. Here fridge doors hang on their hinges revealing the body draws inside.

The building is said to be haunted by many spirits and there are sightings of shadows, noises, voices.

People often remark on sudden feelings of oppression and negativity with many reporting the strange happenings. 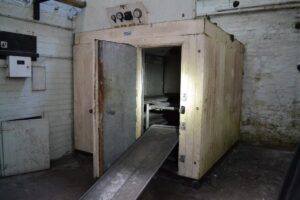