Haunting Nights started investigating the paranormal within Edinburgh in 2019. The team have visited many haunted locations such as the infamous edinburgh vaults for many years previously its only been within the last year we have learned so much about this amazing city.

With its hidden closes and shadowy underground passageways, Edinburgh’s history is teeming with nefarious deeds and bloody histories, from the shocking tale of Half-Hangit Maggie to the infamous grave-robbers Burke and Hare.

But throughout the intervening centuries, there have been reports that some of the dead in this city don’t disappear 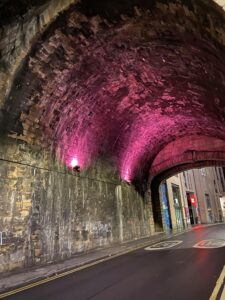 The Cowgate Area, Edinburgh:  On certain nights a strange dark figure can be seen lurking near the bridge.  The ghost of a man has been reported with rope burns from the hangman’s rope which is still around his neck. 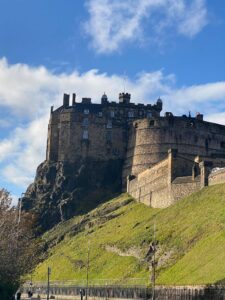 Edinburgh Castle  is the home of the Scottish Crown Jewels and is reputedly haunted by several apparitions.  A drummer, sometimes reported as being headless, has been witnessed on part of the castle battlements and drums are heard more often than the apparition is seen.  The spectre of a dog has been reported near the main castle entrance;  other manifestations include ghostly soldiers, and in the recently opened up vaulted dungeons figures have been seen.  Edinburgh has a hidden underworld to which the castle is strongly connected – including a series of secret tunnels leading from Edinburgh castle down the Royal Mile. One of these is rumoured to lead to Holyrood.  When these tunnels were first discovered several hundred years ago, a piper was sent to explore. He kept playing so that his progress could be tracked by those above. About half way down the Royal Mile the piping suddenly stopped. When a rescue party was sent, there was no trace of the piper. He had simply vanished.  The piper’s ghost still haunts Edinburgh today, walking endlessly along the underground tunnel beneath the Royal Mile. His music can sometimes be heard from within the castle. 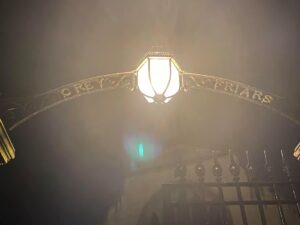 The Ghosts of Greyfriars
Edinburgh’s spooky Greyfriar’s Cemetery is situated in the middle of the old town, just off the end of George IV Bridge and near to the Museum of Scotland. It is a popular tourist destination and is perhaps best known for the story of Greyfriar’s Bobby, the dog that mourned its master and was immortalised by the famous film. It is also the resting place of “famous” Scots poet William McGonagall – known as the worst poet in British history! But perhaps its greatest claim to fame is that it is said to be one of the most haunted areas of Edinburgh. Quite an achievement in a city with as many ghosts and spooks as Edinburgh. 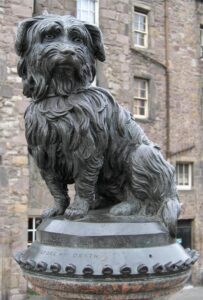 Historically, Greyfriar’s Cemetery is best known as the burial ground for the 17th century Covenanters persecuted by “bloody” George Mackenzie in the Covenanters’ Prison. Since then it has been the site of many hauntings and strange paranormal, including sightings of the ghost of Mackenzie himself – the infamous Mackenzie poltergeist.

As well as the hauntings, the place seems to have a fascination over people. Many visitors experience strange happenings, even if they don’t actually witness a full ghostly manifestations.

The place’s reputation for gruesome activity continues today. In 2004, two teenagers were convicted of desecrating the cemetery. It was alleged that they cut the head from one of the corpses and used it like a glove puppet. 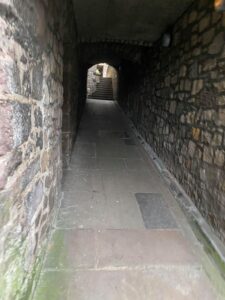 Grassmarket, Edinburgh:  An apparition of a lady with a face heavily scarred by fire has been seen in the area of the Grassmarket. It is believed she and her brother were killed by the local authorities for sex crimes. Other manifestations on the Grassmarket include reports of a phantom coach being pulled by a team of six horses, shadowy figures and the ghostly activity in the White Hart Inn which is Edinburgh’s oldest pub and with the last drop public house & maggie dickson’s  you have many a haunted location to pick from.

Join Haunting Nights on An Interactive Ghost Walk around the City taking in the paranormal hotspots and legends of the hauntings.

Interactive Ghost Walk are for the ages of 16 & over.