Haunting Night’s Top 5 Most Haunted Castles in The UK

Haunting Nights have spent many years investigating haunted castle all over the world. In this blog haunting nights have looked into our top 5 of  favourites here in the UK.

Oxford castle is now a great tourist attraction  built in the 11th century by a Norman noble called Robert D’Oyly. It soon became a vital military stronghold in relation to power in Oxfordshire with large fortifications and a grand moat. But as the city of Oxford got bigger, it’s realistic defensive capability quickly declined. It saw battle return during the Civil War when much of it was destroyed by parliamentarian forces, as Oxford was used as the capital of royalist operation during the campaign . The castle really couldn’t defend well against the parliamentarians as it didn’t even have a moat anymore at that point. As it was almost completely in ruins, the castle went on to be used as a prison. It was only closed as a prison in the 1990s. With it’s long and bizarre history, Oxford castle in one of the most haunted castles in England. From Prison guards while a jail to visitors have reported paranormal activity over centuries of history at this location; they claimed to have heard strange banging noises. Following the noises, the guards were confronted by the sight of ghostly shadows vanishing.

Join Haunting Nights at this spooky location and see what awaits you in the crypt! 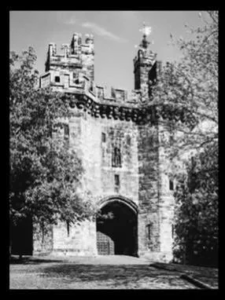 Lancaster Castle, also known as John O’Gaunt’s Castle, has a bloody history that dates back 1,000 years,

Owned by the Queen, the castle has been at the centre of some of Lancashire’s most significant moments of history – including the scene of 200 executions, incidents of religious persecution, and of course, the notorious Lancashire Witch Trials.

Once the only assize for the county, the castle saw a vast number of people pass through its doors who were accused of various crimes – many of which were punishable by death.

The castle also served as a prison from the 17th century, housing prisoners up to 2011.

Famous prisoners included Father Edmund Arrowsmith who was a Roman Catholic priest who said Mass in the Brindle area between Blackburn and Preston.

The saying of Mass was an offence punishable by death and he was arrested in 1628 and condemned to die as a traitor.

He was hanged, drawn, and quartered, and was displayed on top of John O’Gaunt’s Gateway.

George Fox, who founded Quakerism, was summoned to Lancaster Assizes several times, including in September 1664 when he refused to take the oath and was remanded in custody.

Many ghosts are said to haunt the castle with strange goings-on including the sound of  whispers and loud footsteps in the courtroom, crying from the Barrister’s library, and security cctv has even captured shadowy figures many times.

Visitors have reported being touched & pushed and some have claimed to have heard footsteps and the noise of jangling keys in the wing block of the prison.

A dark monk is said to haunt the prison grounds, while past inmates and prison officers report to have seen the spirit of a young girl. The little girl is often accompanied by a old and haggard woman, and can be heard running along the corridors of the prison.

During the 1612 trials of the Pendle Witches, one of the accused Old Demdyke died in one of the dungeons. Her spirit is believed to be responsible for much of the ghostly activity in the old cell within the Well Tower. Join Haunting Nights on The Final Chapter Pendle Witches Ghost Walk and see this location close up!

With some 900 years of history behind it, it would almost be a surprise if Edinburgh Castle wasn’t one of Scotland’s and the uk’s most haunted sites and that is why its in number 1 for Haunting Nights.

Since its construction as a military fortress in the early 12th century, the castle has witnessed surprise attacks, executions, and even a brief capture by the English. Reincarnated as a tourist attraction, Its dungeons, which once hosted the likes of Duke Alexander Stewart of Albany (who escaped, stabbing his guards to death and then burning their bodies), Lady Janet Douglas of Glamis (accused of witchcraft and burned at the stake), and an unnamed piper who once wandered down one of the castle’s underground passages and never returned.

In 2001, Edinburgh Castle became the site of the one of the largest paranormal investigations in history. A team of nine researchers and over 200 members of the public explored the castle’s forgotten chambers and secret passages for signs of ghostly happenings. The public was not told which areas of the castle were rumored to be haunted and which were not. 51% of participants in haunted areas reported paranormal experiences, while only 35% did so in the non-haunted areas.  Many reports of Shadowy figures, sudden drops in temperature and the feeling of something tugging on your clothes are all everyday experiences in Edinburgh Castle. Join Haunting Nights In Edinburgh on the hunt for the serial killers bruke & hare on our Interactive Ghost walks and Viddry Street vaults Ghost Hunt.