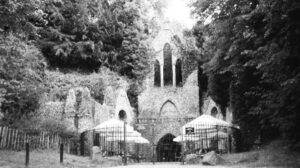 The caves have a number of phenomena associated with them.

Firstly, the apparition of Paul Whitehouse haunts the caves and the hill above.

It is said that he is searching for his heart, which of course is now interred at a close by Church .

Secondly, a considerable number of visitors have reported seeing a man “in alarmingly old-fashioned clothing wandering the passageways”, but when they see his face he simply vanishes.

Finally, the caves are said to be haunted by a White Lady.

This is believed to be a young woman named Sukie or Susan, and the story concerning her is a tragic one.

She was employed as a maid at the local George and Dragon Hotel during the late 18th century or early 19th century.

It is said that she resisted three local young men, preferring the attentions of a man of “higher social standing”.

This infuriated the three men, who decided to play a cruel trick on the maid.

One wrote a letter purported to be from her desired suitor, wishing her to meet him in the caves and wearing a bridal gown.

This she duly did, but on her arrival at the caves she was greeted by the taunts and jeers of the coarse young men.

There are a couple of versions as to what happened next.

Some state that in temper, the belittled girl threw a stone at the boys, and one threw another back, which struck her on the head. 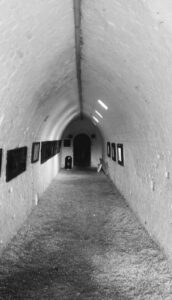 Another states that she somehow slipped on the rocks and struck her head.

Which ever is the correct version, she was carried back to the George and Dragon Inn, as it was then known, where she later died as a result of the injuries sustained.

Audible phenomena and cold spots have also been reported.