Haunting Nights are going state-side to visit some of the most haunted locations in the USA. Full details to be announced very soon…. Our first trip takes us to the Golden State in 2021

One of the most historically significant houses in San Diego, the Whaley House is also known as one of the most haunted places in America. Its rich past is also a torrid one, including the suicide of Violet Whaley from a second floor   balcony and the hanging of Yankee Jim Robinson, which took place before the house was constructed.

Visitors to the Whaley House consistently report strange sounds, sights and inexplicable events – so much so that many paranormal experts have investigated, including Travel Channel’s America’s Most Haunted.

From heavy footsteps and disembodied voices to the apparition of Thomas Whaley and his wife Anna, visitors report being spooked, intrigued and even a bit frightened while touring the house.

Other ghosts have been seen as well; and because the house was home to many residents over the years after the Whaley family moved out, nobody knows for sure who they are.

But one thing remains constant: The eerie presence of those who have left the world of the living but refuse to leave the Whaley House.

Her husband developed the “gun that won the west”—which came back to bite Sarah Winchester in the butt. After losing her husband and a young daughter, the widow Winchester consulted a spiritualist who alleged the family was being haunted by American Indians, Civil War soldiers and others killed by the famous rifle.

It was recommended that Winchester move west and use her $20 million inheritance to continuously build a home to appease the spirits. What was erected between 1884 and 1922—now known as the Winchester Mystery House—was a sprawling 160-room mansion with haphazard architecture that leads touring guests to nowhere, though there are spirit guides.

The Queen Mary certainly has a past that’s ripe for modern-day hauntings.

She started life as a luxury liner, setting forth on her maiden voyage from Southampton, England, in 1937, and hosting everyone from Bob Hope to Winston Churchill. But when WWII began, the Queen Mary was drafted into service as a ferry ship, carrying thousands of troops into battle areas.

The fancy lady was stripped of her chic facade, painted a camo grey and dubbed the “Grey Ghost.” After years of service in war, and at her majesty’s whim, the Queen Mary was eventually sold to a tour operator and sent to retirement in Long Beach, where she’s been a floating hotel and event spot since 1967.

According to the late psychic and ghost hunter, Peter James, who led tours around the Queen Mary, almost all areas of the ship including the second class pool deck and engine room 13 are known to be haunted. 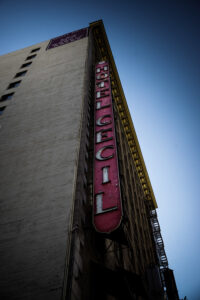 Though it’s had the odd ghost sighting or two, the Cecil Hotel’s history is haunted by real-life boogeymen.

The hotel saw murders in the ’20s and ’30s, suicides out of upper-floor windows in the ’60s and the residence of serial killers Richard Ramirez (the Night Stalker) and Jack Unterweger.

Most infamously, the naked body of tourist Elisa Lam was found in a rooftop water tank; surveillance video showed Lam acting oddly in the elevator.

It was enough to inspire an entire season of American Horror Story, but apparently not enough to shut down the hotel; it’s now called Stay on Main and slated to be converted into a mix of rental units and hotel rooms.

According to legend, Alcatraz prison is known to be one of the most haunted spots in the country, if not in the world. Is it really haunted though?

For many people that have visited the prison and have experienced supernatural phenomena, it certainly seems to be haunted in a mysterious way.

Staying at Alcatraz was no joke and even the spirits of the most insane and notorious criminals were broken there. It is said that the empty cells inside the walls of Alcatraz still home the restless spirits that remain there.

Some of the worst criminals in America including Arthur Doc Barker, Machine Gun Kelly and Al Capone spent many days behind bars in this prison.

The prison was built to be a maximum security place where inmates would have minimum privileges.

Prisoners breaking the rules would be sent to the strip cell where they would have to remove all of their clothing and spend time in a cell with no lights, no sink, no mattress and only a hole inside the ground for a toilet.

For this reason, it has been said that many spirits aren’t able to move on from Alcatraz to make a new home in the spiritual world.

Be sure to visit this cell where an inmate died after screaming that a creature was going to kill him.

Many visitors have said that they have felt an extreme coldness wrapping around them in the room as if many spirits were still present.

Experience the A, B and C Cell Blocks

Make sure to also view these cell blocks when you are visiting the island. Many people that have toured the prison have said that they can hear moaning and crying coming from these blocks.

You may even run into the spirit of the “Butcher”, who was known to be assassinated here in the 1940s.

You never know what you will run into when you take the plunge and find out more about this exciting yet daunting prison island!

Is Alcatraz haunted? The Haunting Nights team will find out…..