Haunting Night’s look into the story of the Famous Fox sisters. 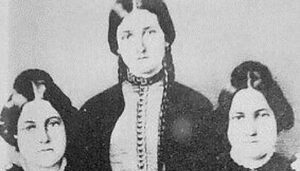 America’s spiritual beginning into spiritualism which  mediums and spirit-talkers past messages from the other side was started in Harlem, New York in 1848 by Margaret and Kate Fox. The Fox sisters went on to become household names in their area. And it all started as a joke!

Kate and Margaret Fox grew up in a farmhouse that was rumoured to of been the scene of a horrible murder and the dead body was said to still buried somewhere in the cellar. The Fox sisters heard some of these stories about the haunted location and decided to use it to play a prank on their mother. They tied strings to apples and bounced them down the stairs in the dead of night to create the illusion of a ghost.

Their mother heard the eerie sounds in her house and came to the conclusion that her home must be haunted. She followed the strange sounds until they led her to her daughters’ shared bedroom. Faced with the option of confessing to their prank and being punished or following through, 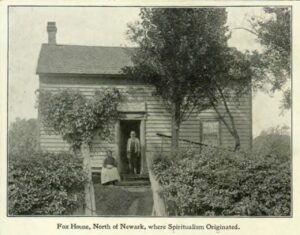 the two girls decided to take the prank further. Kate spoke in the direction of a dark corner and talked to the spirit, instructing it to respond in numbers. She asked the ghost to count to 10 and ten raps responded. More questions followed and each was answered correctly. This was enough to convince Mrs. Fox that her daughters could, in fact, talk to ghosts and she told everyone who  would listen.

The story of the two young Fox Sisters and their ability to talk to the other side quickly spread throughout the local area. The third Fox sister, Leah, was living on her own at the time after being abandoned by her husband. She heard about her two talented sisters, saw an opportunity to make money and came in to take them away on tour where they could display their skills and wow audiences. They added new features to their act with tables lifting off the ground, objects flying across the room and appearances from actual ghosts. Whilst on tour in New York and Albany they performed hundreds of seances and caught the attention of local celebrities such as William Bryant and James Cooper.

Horace Greeley took a particular liking to their performances. He had recently lost a son and took comfort in the idea that he could still communicate with his lost child from across the veil. He housed all three of them in his mansion and even paid for Kate’s education. Margaret was given the same offer however Leah refused to let her go as she was the most talented of the two sisters. Their act could not survive without her. 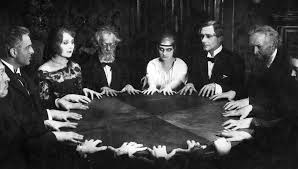 Some critics claimed that they were frauds while others hailed their seances as the greatest things that they’d ever experienced. Sceptics tried so hard to prove that the Fox Sisters were faking their interactions with the other side. They claimed that the sisters were using ventriloquism and mechanical devices to produce the illusion however they never could prove it. Commissions were set up to design tests such as posing questions to the ghosts that the sisters could not possibly know the answers to and even though their answers were never consistent, they were able to impress on-lookers enough to be given the benefit of the doubt. Some commissions even had the Fox Sisters’ feet bound and checked their underwear to ensure that there was no trickery but the sisters still managed to create the illusion. Most of the critics were forced to admit to finding no signs of fraud.

Perhaps they only showed their best performances for the critics because accounts from some of their shows were far from convincing. Leah was accused of trying to get personal information out of the sitters that her two sisters would then use to ensure that the ghosts answered the questions correctly. Whilst summoning the ghost of Benjamin Franklin, one of the sisters mentioned that his grammar was not nearly as good as it should have been, which made Maggie get up in a fury and leave them room.

Unfortunately for the sisters, they were unable to handle their new lives in the limelight. Each of them descended into alcoholism to help them cope with the stresses of their lives, which proved to be their undoing. Copycats emerged, replicating their performances while making them flashier and more entertaining. The world soon forgot about the Fox Sisters and found their spiritual fixes elsewhere. As their stars faded, the three sisters found it increasingly difficult to work together.

Maggie was the first to leave the Fox Sisters. She fell in love with a man from a rich aristocratic family named Elisha Kent Kane. They went on to have a wedding witnessed by close friends however Kane did not want Margaret to be a real part of his family so even though they exchanged vows and wedding rings, no marriage license was signed. When Kane died in a freak accident, Margaret was left with nothing. She had no choice but to return to being a medium but she hated every second of it and turned to alcohol which destroyed her health and the quality of her performances.

In 1888 she was called in by a commission in New York to prove her skills and failed the test.

In the same year that Margaret failed the test set by the New York committee, Kate’s husband died. Kate found solace in alcohol and her drunken behaviour became so bad that her children were taken away by the State. By this time their older sister Leah had abandoned them to marry a successful businessman.

1888 was also the year that a reporter offered Margaret Fox $1,500 to confirm that their whole act was a fraud. She accepted and stood with Kate before a full house in New York where she showed the crowd exactly how she and her sisters faked the appearances of ghosts by cracking their toes to make it sound as if ghosts were actually with them.

The world never forgave them for their deceit. Their once loyal fans wanted nothing more to do with them. Margaret later recanted her confession however the damage was done. Their careers as spiritual mediums were finished. Margaret and Kate Fox used their skills at creating illusions to gain nationwide fame however they both died penniless.

An interesting twist in the tale came a few years after their deaths. When Margaret and Kate pranked their mother in 1848, they did not genuinely believe the murder story about their house however in the years after the Fox Sisters died, some kids were playing in the ruins of their old home where they came across the remains of a human body behind the walls of the cellar. Examinations on the skeleton found that it had been there for at least 50 years

The house remained there before falling victim to a fire on September 21, 1955. 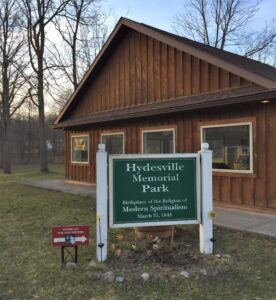 That fire destroyed every splinter of the original Fox Family home. That means the only physical connection to the original house is the base located in Hydesville Memorial Park. 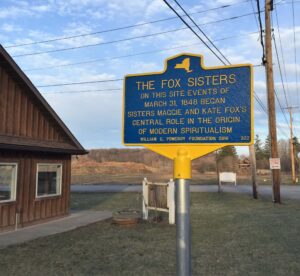