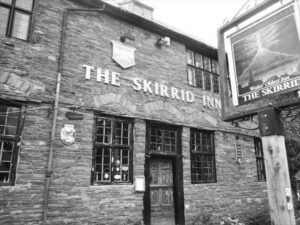 The story goes the inn was used as a  meeting point for local supporters of the Welsh Revolt against the rule of Henry IV, the uprising being led by Owain Glyndwr. In the early 15th century he is said to have personally rallied his troops in the cobbled courtyard before raiding nearby settlements sympathetic to the English.

It is believed that the first floor of the inn was once used as a Court of Law and over the period of a great many years, as many as 182 prisoners were adjudged guilty of crimes serious enough to warrant the sentence of death by hanging, a sentence that was carried out at the inn itself, the last case of capital punishment purportedly taking place sometime prior to the death of Oliver Cromwell (1599–1658).

Over the hundred years of history over 182 felons would meet their fate, dangling by the neck over the buildings stairwell at the Inn. 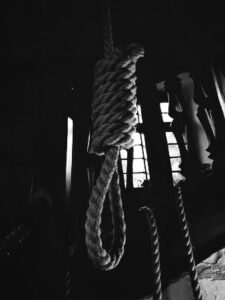 An unusual style of customer relations you may think, until you realise that, as well as serving up frothing tankards to thirsty travellers, the premises also doubled as a courthouse. Until, in the mid 19th century, it pulled out of the execution business altogether and has since dedicated itself to the sustenance of the living.

Needless to say, with such a sinister pedigree, The Skirrid Mountain Inn can offer many a ghostly tale to chill the blood.

The spirits of those executed here, are said to make their presences felt in a rather direct and disturbing way.

Many Locals & Guests at the Inn have felt the overwhelming sensation, of an invisible noose being slipped around their necks and have been alarmed to feel it getting tighter & tighter. Although, they always manage to break free from the strange grip, they bear the distinct impression of the marks of the rope for sometime afterwards.

Another ghost to haunt the old and, in parts, spooky property is that of woman who, although never seen, is both felt and heard by staff as she rustles invisibly past them, her progress marked by a distinct chill in the air. This lady is suppose to be an Victorian Landlady called fanny price. you can still visit her grave in the local graveyard.