The Watcher, The South Bridge Vaults Edinburgh’s Most Haunted

The Watcher, The South Bridge Vaults 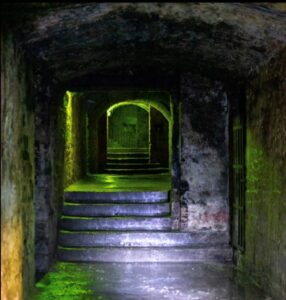 The South Bridge Vaults are situated under South Bridge in Edinburgh’s old town, the bridge was completed in 1788, shops were built along the surface of it and the bridge was sandwiched in by tenement buildings creating an enclosed space between the arches beneath the bridge’s surface. The shop owners decided to utilise this space and filled it with a network of tunnels and 120 vaults with the intention of using them for subterranean shops, workshops, and storage space. This was the plan anyway but there was a problem, the bridge was built out of limestone which is very porous, this combined with the Scottish weather meant that the vaults were continuously flooding. This was no use to the merchants as it was destroying their stock, it wasn’t long before they abandoned the vaults but the vaults didn’t stay empty for long. Homelessness was a huge problem in Edinburgh especially in the old town and the city’s poorest people moved in, this they did in their droves, the vaults rapidly descended into an overcrowded, filth infested, disease and poverty ridden slum. Soon illegal taverns and distilleries, brothels, drug and gambling dens, and ‘gentleman’s clubs’ opened up in the vaults in separate areas to the slums and it became a playground for criminals, murderers, thieves, body snatchers and the very worst of Edinburgh’s criminal underclass….

A few hundred years later the vaults are now mainly attractions, pubs and venues and were once even home to a witches coven but the atmosphere and energy of its former grim existence still remains, with so much corruption, misery and suffering it’s no wonder the vaults are so paranormally active, and some former occupants have never really left….

The Watcher is the most commonly experienced and most renowned paranormal phenomena in the South Bridge Vaults. We tend to call him the Watcher while others refer to him as Mr Boots but both nicknames make sense and you’ll see why as I explain. He can be detected in different ways, by a few or all the senses. He can be smelt, seen, heard, sensed or you can physically feel him and people who often come to the vaults, for example tour guides, will experience him in different ways on different occasions. Witnesses who have seen him, give a similar description. He’s a dark figure, tall, slim but well built with a long flowing cloak or coat, long hair tied back in a low ponytail, sometimes a hat and long boots. No-one to date has ever been able to describe his face, it’s either blacked out, disguised/hidden or he has his back to people, it’s like he doesn’t want to be recognised or identified, he’s also sometimes seen as a tall black shadowy figure. People hear his loud distinct heavy footsteps within the vaults, the footsteps have been heard on many occasions and one thing that makes them stand out as footsteps is that you can hear a scuff or shuffle as they come to a standstill (a very common trait associated with him and one of the reasons he is called Mr Boots) they also sometimes hear the sound of keys rattling. He smells of vile breath, a combination of rotten teeth and whiskey and has been known to tap, grab, shove and brush passed people. One of the most unnerving things is that people will not only smell his breath but they can feel it on their face or neck like he is standing right next to or in front of them, potentially deliberately standing close and breathing on them to frighten them. We will attribute activity to him depending on the nature of it and/or judging by what else has gone on that night. 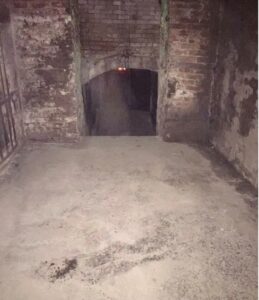 He seems like he is a ghost of the deceased rather than some other kind of haunting i.e, demonic, although his behaviour can seem poltergeist like sometimes. There is a theory that in life he was maybe a watchman or security at a time when the vaults were used by merchants in the late 1700’s early 1800’s, there were lots of valuable goods and equipment in the vaults and lots of desperate criminals about. As far as we know he’s not known by name. The nature of his character is territorial, like he’s responsible for the vaults or they are his and we are intruding. People have reported hearing “GET OUT” or “OUT” he tends to seem like he is watching/ guarding (hence his other nickname The Watcher) or acting in a way to encourage you to leave i.e, a pull or push towards the door or coming at you from a direction as if to chase you to the door. He just has a watchman-ness about him including his attire. Originally his presence was believe to be a residual haunting or recording like “stone tape theory” but quite quickly it was realised that he was aware of and interacted with people, a so called intelligent haunting. I don’t believe he would do anything massively unpleasant or that he is even capable of it, although as mentioned poltergeist activity has been attributed to him, there have been a few scratches. He isn’t known to be horribly violent, he basically seems like the man he maybe was in life, intimidating and a bit of a bully but combine that with him now being a ghost and you’d get a fright if you came across him.

Here are a few examples of encounters with the watcher, one night one of the tour guides was doing the evening tours then locking up, at the end of every night guides have to go into the vaults and blow out the candles themselves, it’s scary! She made a mental note of where the candles were still lit during her last tour so she would know where she needed to go to blow them out, it just makes the job of blowing them out a bit quicker, and you want to be quick! She started at the top of the corridor and worked her way down, she’d blown them all out apart from the last two that sit on a shelf on the bottom wall at the foot of the corridor, which she knew were still lit. As she walked closer she noticed the candles looked very dull but down there still looked illuminated by candle light, she stopped, trying and work out what she was seeing then suddenly a tall dark figure moved and she could see the candles brightly again, like someone but obviously not a living person (given she could see through them) had been stood motionless “watching” and blocking the candles then suddenly moved. She was out of there like a shot! Needless to say those candles got left to burn themselves out. 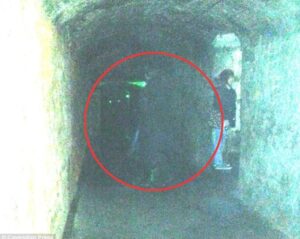 Another guide one night was blowing out the candles alone, he said he heard the footsteps coming down the corridor, they stopped at the doorway of the vault he was in, the guide said it felt like something was peering in at him, and then the footsteps continued down the corridor. There seems to be a tendency from him of sometimes chasing people out and sometimes tolerating but keeping an eye on people, and who’s to say he’s even always aware of us as we’re maybe not always aware of him. 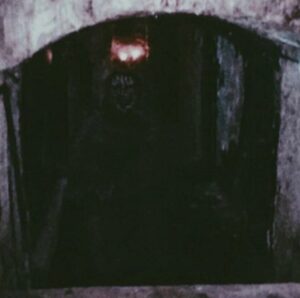 I’ve added a few photographs that visitors and investigators have caught of what is believed to be The Watcher, join Haunting Nights on a paranormal investigation or Auld Reekie Tours on a tour, and you might just encounter the watcher for yourself…